The AAC family of audio codecs comprises some of the most efficient audio coding technologies available today. Standardized by ISO MPEG, it is designed to provide high quality audio at lower bit-rates than previous MPEG audio coding formats.

The original MPEG-2 AAC codec was further reﬁned through the MPEG-4 standardization process and has subsequently been enhanced with bandwidth extension technology yielding HE-AAC (High Efficiency AAC), and with the addition of parametric stereo, resulting in HE-AAC v2.

Via Licensing administers a joint patent license which provides a convenient and cost-effective way to acquire the rights to practice the essential AAC patents from a set of licensors. The AAC patent licensing program provides coverage for all the AAC technologies identiﬁed in the following diagram. 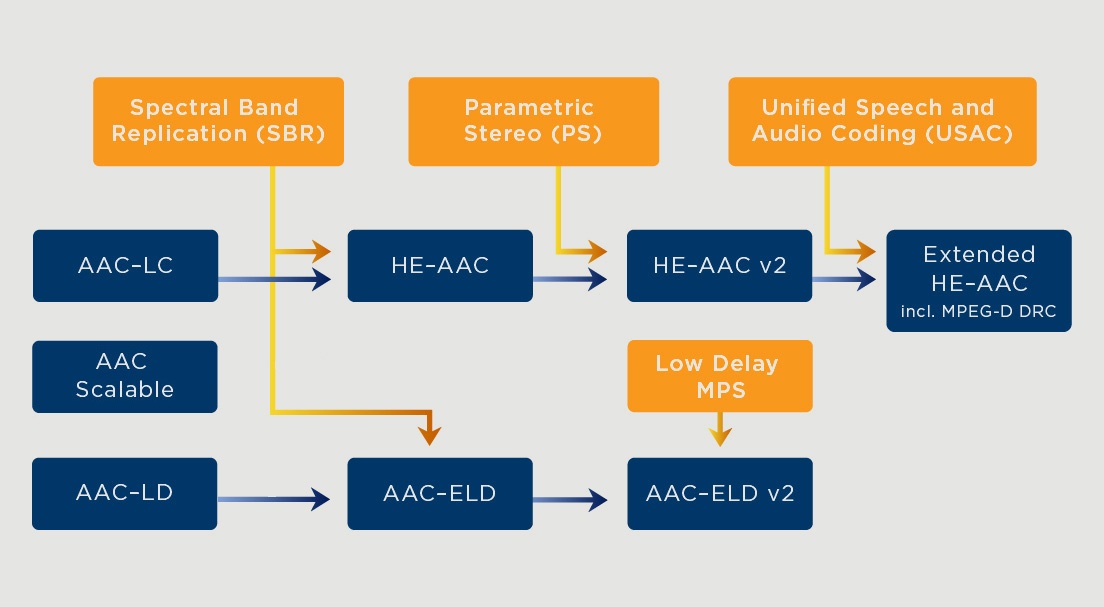 In this way the AAC family with its latest enhancement, xHE-AAC can support a wide variety of applications ranging from extremely low bit-rates required for reliable speech and music delivery over 2G cellular phone networks, to “transparent” quality (indistinguishable from the original source material) for the most discriminating listeners.

Via Licensing also offers joint patent licenses for two technologies that are complimentary to AAC, the MPEG Surround license and the MPEG-4 SLS license (as used in HD-AAC).
MPEG Surround>>
MPEG-4 SLS>>

Scroll To Top
This website or its third-party tools use cookies, which are necessary for its functioning and required to achieve the purposes illustrated in the cookie policy. If you want to learn more or withdraw you consent to all or some of the cookies, please refer to the cookie policy. You accept the use of cookies by closing or dismissing this banner, by clicking a link or button or by continuing to browse otherwise.Accept